How To Save Money, And Calories, In Vegas (And Anywhere)!

Josh and I are headed to Vegas for the third time together! If you have ever been, or if you're thinking of going, the food can be quite expensive. Not to mention- it takes quite a bit of time to walk to new restaurants, taxi, etc etc. A "cheap" meal in Vegas would be around $10/person and that's at something like McDonalds (gross). If you are in Vegas for a three day weekend and are planning to eat out for 3 meals a day, you should budget about $200 a day for food alone, and that's on the very modest end.

If you are planning a trip to Vegas, PLEASE, fully enjoy yourself. Find 1 or 2 places per day that you want to try.

You should ENJOY your time, Vegas has some of the most amazing restaurants and buffets in the world- but don't let that ruin your waistline or your wallet. Budget for 1-2 meals a day, max, to enjoy out.

Here's some tips on saving money and saving calories:
1: plan before you go! the night before we leave for Vegas, or any trip, we go to the store to stock up on protein bars. One bar at the store at home is about $2 and counts as an entire meal for us (a lot better than $30/person plus a taxi ride plus an hour of time in Vegas)
2: bring protein powder. you can get a ton of things through TSA- including protein powder. we usually bring about 2 scoops per person per day that we are traveling- plus, it's great for post workout meals and a lot lighter than bringing pre-made protein drinks
3: make sure you pack all of your supplements, especially your greens. the supplements that we use can be found on bowmarfitness.com
4: make sure you bring/pack your ISO bag if you plan to pre make meals and bring them with you, again, you can get all food (other than things like peanut butter) through a carry on bag. use sarah for 10% off on isolatorfitness.com
5: bring an empty gallon jug to fill up water with, even water in Vegas is expensive and there's no point in wasting money if you don't have to!

I Don't Get It- You Love Your Cats And You Hunt. Why Do You Love One But Hunt Another?

It's true. I, Sarah Bowmar, am a CRAZY cat lady. There's no shame in my game. I really really really love my cats. And I rescued them both. And I have spent thousands of dollars on them to keep them in the best health and shape possible. I also do my part with population control by spay and neutering my pets. That being said, I am also a hunter.

For many, it's not hard to comprehend that wild game such as turkeys and deer are much different than a house cat. However, I still get asked quite often how it's possible for me to love my pets so much but also hunt.

If anything, I believe hunting shows that you have a greater compassion for animals than someone who buys their meat at the store (don't get butt hurt, it's my blog and I am allowed to have my opinion). Too often, I feel that many people who go to the store to buy their meat are completely detached from the fact that an animal had to die for that meat to get there. Regardless of who killed it, it was alive and now it is on a shiskabob. Many times, animals are not treated the best if they are slaughter animals (if you want more details, you can watch Earthlings on YouTube). For me, hunting ensures that I know where my food is coming from and I know that it lived a life like it was meant to.

And one last thing- I think a lot of anti-hunters have a misconception of the love that hunters have for animals. Plus- the respect. If i can get into bow range of a deer and am fortune enough to harvest is, you better believe I will be more grateful for that deer for the months to come than someone who just goes to the store to buy their meat. I cry EVERY SINGLE TIME I harvest an animal. And not in sadness but in true respect for the beautiful creature that God has allowed me to harvest.

In summary, my house cats are mine. They are my pets. They are not over populated in my home. I will not eat them. I will eat a deer. It does not mean that I respect the deer any less.

Should I Lift or Do Cardio First?

If you are wondering this- trust me, you are not alone. This has to be one of my most top asked questions which is what warranted the need for this blog post!

Again, this is all my opinion. If what you do works better for you- then keep doing it.

In an ideal world, splitting cardio and weights would be best. Fasted cardio in the morning and then lift in the evening. If you're like Josh and me, we don't have the time to go to the gym twice a day plus we live over 20 minutes away from the gym- going twice is just not feasible.

We like to lift weights first. There are three main reasons:
1: We like to use our strength for our workouts. Your body only has so much testosterone and strength and we like to capitalize on what we have and get the most out of our lifts
2: We use a pre workout. Using a pre workout before you do cardio is NOT ideal so it would make the most sense to lift FIRST and utilize your pre workout
3: We become sweat swamps during cardio. I personally really care for my skin and don't want to break out nor do I want to lift with swamp butt and be dripping in sweat for 45 minutes while I lift


I really hope this clears up why we choose to lift before we do cardio- it's not rocket science!
Posted by Sarah Bowmar at 6:08 PM 16 comments:

This stew is packed full of protein, nutrients, veggies, and carbs- a bodybuilder's dream!

If you don't have access to antelope, venison, elk, etc- you can always use turkey or bison or lean beef. It's up to you!

In our household, we only eat meat we have harvested ourselves. It's the most organic meat on the planet!

In a crock pot, add backstraps, onions, and water. Cook on high for 3-4 hours of low 6-8 hours. Once the meat becomes brown, slice and put back in the crock pot. Add a dash of garlic powder and salt and pepper to taste.

On the stovetop, once the crock pot time is over, add tomatoes, sweet potatoes, and crock pot mix to a large pot. Turn on medium heat. After 20 minutes, add green beans, carrots, and corn. If you're using regular potatoes- do this after an hour. Let simmer on medium for ten mounts. No extra spices are needed. 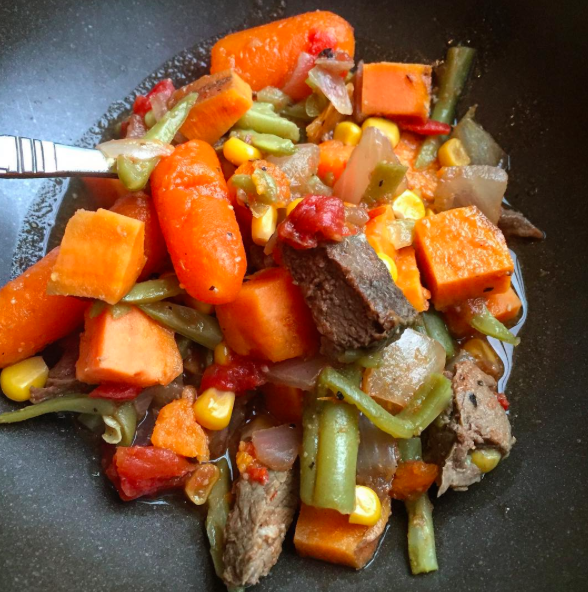