If you are anything like me- you probably love sweets. If not, ummmm who are you?!?!? 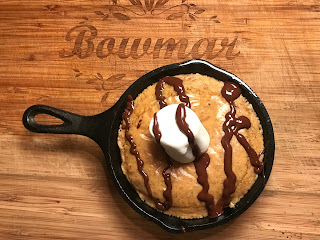 I think I increased my risk of diabetes but just writing those numbers. That's sickening.

My healthy version is only a few ingredients and like 1/10 of the calories and macros. See below:

Mix cake mix, egg, and enough almond milk to make a batter. Add 2 TBSP PB2. Spray a 5 inch cast iron pan with spray oil. Dumb mix into pan and cook for 8-10 minutes (or until golden brown on top). 5 minutes in- pull out and add marshmallow to the top. Melt chocolate chips (I think I used 1 TBSP) and drizzle on when the cookie is done!