It's literally all poison to our bodies. Don't believe me? Keep reading.

Your body treats alcohol like a poison because that's what it is. It's something that it doesn't want inside of you. To fight it off and to sober up, your body releases an enzyme called alcohol dehydrogenase.

This enzyme will snatch a hydrogen atom off the alcohol molecules in whatever $1.50 car bomb you just slammed with your friends and will render in into a non-intoxicating acetaldehyde. Great right? Except more often than not, you're slamming shots and drinking quicker than your body can produce this powerful enzyme.

So what happens to all the alcohol that your body actually absorbs? Well for starters, it will inhibit your brain cells. Not like you have much concern for your brain if you are drinking copious amounts but here's the scoop: alcohol affects the way your neurons get their firing triggers from glutamate. Alcohol interferes with the glutamate receptors in your dome piece and hurts their ability to send off the normal "fire" messages. This impacts every single action across your brain: muscles, speech, coordination, judgement, classiness, and so on

So why can you never remember being such a dumbass when you drink? The way your brain makes memories is so complex that even Bill Nye struggles with it, and he's a science guy. Memories are, however, linked to NMDA. Alcohol interferes with this receptor. So good luck remembering dancing on the bar with the lampshade on your head.

Why do you throw up when you've had too much alcohol? HELLO?!?!?! Has your body ever rejected avocado and tuna? Unless you're allergic, smartasses, the answer is no. Why do you get hangovers? Because your body was literally up all night trying to repel and correct the poison that you put in it.

I have been sober since February 2012 and don't plan on ever drinking again. I just tell people I'm allergic since very few people can wrap their heads around the fact that I don't want to poison my body. 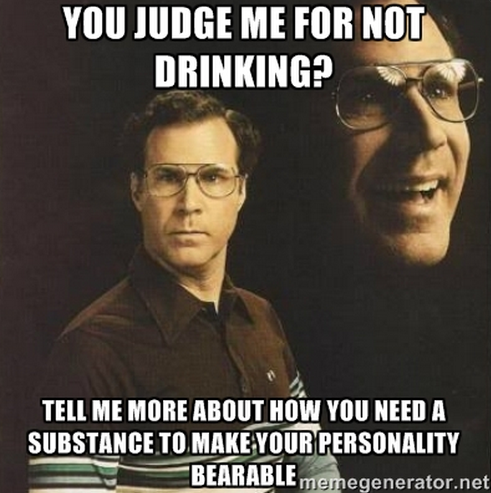